Current scholars, Cassis Boateng and  Kierra Foley will present their projects and what they learned through the Design Thinking process at a Hillman seminar later in the term.

During the summer two Penn Hillman Scholars, Cassis Boateng (Penn ’26) and Kierra Foley (Penn ’23), were awarded funding to complete innovation projects that consisted of them reviewing the online Design Thinking for Health course and applying the framework to the health challenge and community that is the focus of their respective dissertation research. The goal of the Design Thinking framework is to generate innovative solutions through creative problem solving while completing the five stages: Empathy, Define, Ideate, Prototype and Test.

Cassis’s research focuses on the role of spirituality in building resilience among African American families traumatized by community violence in West Philadelphia. For his project Boateng wanted to interview Black men who were victims of gun violence, but due to time constraints he was added to one of Dr. Terry Richmond’s studies and received IRB approval to review data that included 19 participants who talked about spirituality or religion as part of their recovery process. Through the course of the project, Cassis learned that spirituality is described differently depending on the circumstances of the injury. For example, participants who suffered from intentional injuries might describe spiritual experiences differently from those who suffered from unintentional injuries. He was also able to identify how Black men used spirituality during their recovery, which will greatly help him in his future dissertation research. 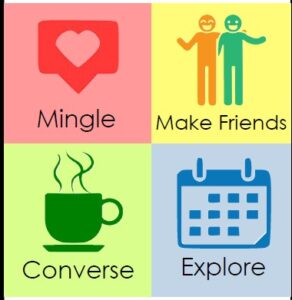 Kierra’s research focuses on LGBTQIA+ elders and problems that they encounter in society. At the beginning of her project, she met with members of this community and was able to identify that many LGBTQIA+ elders were frustrated with their social well-being due to agism experienced in queer dating apps, homophobia and transphobia experienced in mainstream dating apps, feeling excluded from LGBTQIA+ events that cater to younger audiences, and not feeling comfortable attending events aimed at older adults. She brainstormed and came up with the idea of an app aimed at LGBTQIA+ elders and with the help of key stakeholders, decided on the name, Staying Fabulous. While this app does operate as a traditional dating app, it goes a further than that and includes a function for making friends, an event calendar that is co-maintained by the LGBT Elder Initiative, and a message board section that is meant for discussing topics such as sports, food, hobbies, makeup, fashion, pop culture, politics, and religions, etc. The app is currently in the beta testing phase.

Design Thinking for Health is available for anyone to use. Students can view the five modules and examples of other case studies at https://designthinkingforhealth.org. This is the second year that this optional innovation project opportunity has been open for applications for Penn Hillman Scholars.

Categories
Archives
Back To Top